What Is Picosure™ Laser Tattoo Removal?

PicoSure™ is the world’s first effective and safe picosecond aesthetic laser for laser tattoo removal. This breakthrough in laser technology is unlike any other, it delivers ultra-short pulses of energy to the skin in trillionths of a second, speed that has never been used before. The pulse width from a Picosecond laser is 100 times shorter than nanosecond technology, which in turn creates a photomechanical impact resulting in better clearance and less treatments.

PicoSure’s ultra-short pulses are so advanced that it goes further than photothermal action by creating a powerful photomechanical impact, patented PressureWave™, making way for greater breakdown of the ink and pigment for clearance with fewer treatments, less fluence and leaving the surrounding skin unharmed. Dark blue and green inks that were not able to be treated before are now able to be cleared, as well as previously-treated, recalcitrant tattoos, sometime in as few as three treatments. The laser energy is distributed to the tattoo with such force that the energy is absorbed by the ink shattering it into tiny particles. The particles are absorbed by the body and eliminated by the body’s natural process, in turn, fading the tattoo ink with every treatment.

Check out this video about PICOSURE on CBS news.

For the average patient, laser tattoo removal has been compared similarly to the feeling of getting a tattoo, however the removal process pulses are much faster. Your practitioner will give you options as to the best comfort option is for your individual situation.

How Many Laser Tattoo Removal Treatments Are Needed?

The tattoo removal process is different for everyone. The number of laser treatments required for tattoo removal is depends on numerous factors such as size of the tattoo, ink type, location on the body, lifestyle habits, type of laser used and much more. During your consultation, a practitioner will evaluate your tattoo and gauge a realistic treatment process for your individual needs, to achieve the best results possible.

How Often Will I Need Tattoo Removal Treatments?

While the typical laser tattoo removal process takes about 4-8 weeks for the body to absorb the ink particles, each patient and tattoo responds differently. There are ways that may possibly speed up the removal process that include following the recommended post treatment protocol.

How Will My Skin Look After the Laser Treatment?

Immediately following a laser treatment a patient will see an initial slight whitening or “frosting” effect of the skin underneath the tattoo, however, this frosting will dissipate immediately after the removal treatment is complete. Mild swelling, blistering and redness are expected to last for up to a week after the treatment. Your practitioner will go over with you aftercare of the removal process and how to best keep the area moist. 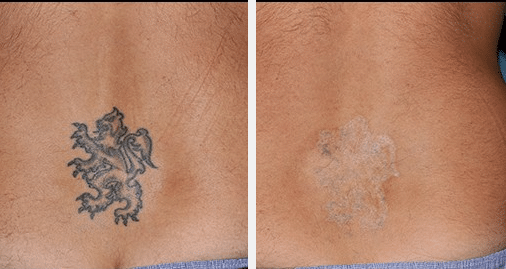 Before the advanced technology of PicoSure, Q-Switched lasers had been considered the gold standard for removing tattoos. Unlike PicoSure, Q-Switched lasers use thermal energy to heat up and breakdown ink into particles. When using thermal energy to break apart ink particles, the breakdown process is limited and can only breakdown the ink into pebble-like sizes. Now with PicoSure, ultra-short pulses hit the ink particle with a pressure so great, the ink shatters into tiny dust-like particles. Since the particles are so tiny, the ink is more rapidly absorbed and eliminated by the body. PicoSure has confirmed success in treating even dark, hard to clear green and blue inks, as well as previously-treated, stubborn tattoos that were not successfully cleared in the past.

Can I Lighten the Tattoo with Picosure™ to Have Another One Put on Top?

Tattoos cannot only be cleared with PicoSure treatments, but lightened in preparation for a cover-up tattoo. Your practitioner may have you wait six weeks between your last treatment and when you have the new tattoo completed.

How Much Does Laser Tattoo Removal Cost?

The cost of laser tattoo removal is dependent upon several factors, including the size of the tattoo and the number of treatments it may require. Most insurance companies will not cover the cost of laser tattoo removal, since it’s considered an elective cosmetic procedure. After your consultation, your practitioner will provide you a price estimate for your individual treatment plan.